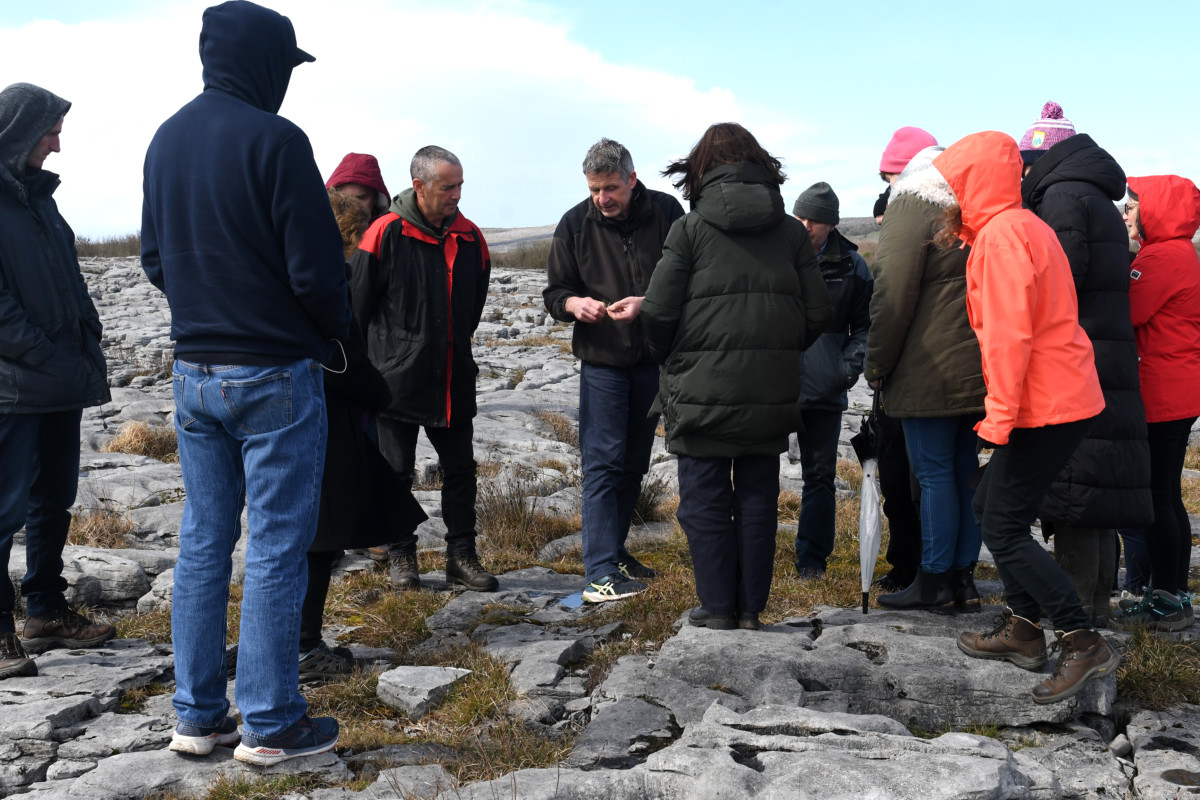 The Burren Programme in North Clare is a unique project supporting farmers in the area to manage their land in ways that support biodiversity.  On the 7th of April, a group of West Kerry farmers took a trip there to meet up with Programme Manager and biodiversity guru, Brendan Dunford and to see how the project works for farmers and nature.  Brendan, like the Burren, is pretty unique.  He works to support farmers rather than instruct them and he is responsible for devising an innovative results-based payment system to incentivise farmers to improve local biodiversity, water quality and landscape.  This is always with farmers in the foreground making the decisions.

Originally from Waterford, Brendan has spent over 20 years living and working in the Burren region. He co-founded Burrenbeo Teo and is secretary of its successor, the Burrenbeo Trust which aims to ‘connect all of us to our places and our role in caring for them’ and co-ordinates events such as the Burren Winterage festival and the Learning Landscape Symposium. Brendan is also a founder of the ‘Farming for Nature’ initiative which aims to acknowledge and support farmers across Ireland who want to protect our natural heritage.  He is a truly remarkable individual and we were privileged to spend time with him in his native habitat.

After an early start from West Kerry, we met Brendan in Tubber Hall, where he gave a fascinating account of the how the Burren Programme evolved as a farmer-led project.  Participation is optional but the vast majority of farmers in the Burren are active participants.  Simplicity is the key to their approach with no paperwork involved for the farmers who get paid for individual measures which support biodiversity.  Participants can earn up to €10,000 annually for supplying these ‘eco-services’.

We left Tubber to spend time in the Burren National Park where Brendan talked in detail about the positive impacts of the farmers’ work on nature, particularly in terms of how grazing animals can be managed to protect the Burren landscape.  Spring gentians were in bloom and we stopped by the to study the karst landscape of the area before heading to Killnaboy for lunch.

The parochial house which features in Fr Ted was the surprise location for our lunch break with a delicious meal supplied from the farm by the McCormack family.  Sourcing locally grown and produced food is an important part of our vision for this creative climate action project.  Pat and Cheryl McCarthy are featured in the award winning film, The Silver Branch by Katrina Costello.

Another short drive in the afternoon brought us to Carron where we met with farmers, Michael Davoren and Tim O’Connell and continued our discussions about the benefits of the Burren Programme and how it supports farmers and biodiversity.  The journey back to West Kerry allowed for plenty of lively discussion on all that we had seen and the possibility of establishing a similar scheme in West Kerry.  Food for thought!

Trip to Tommy Reidy’s Organic Farm, Stradbally and to the Maharees