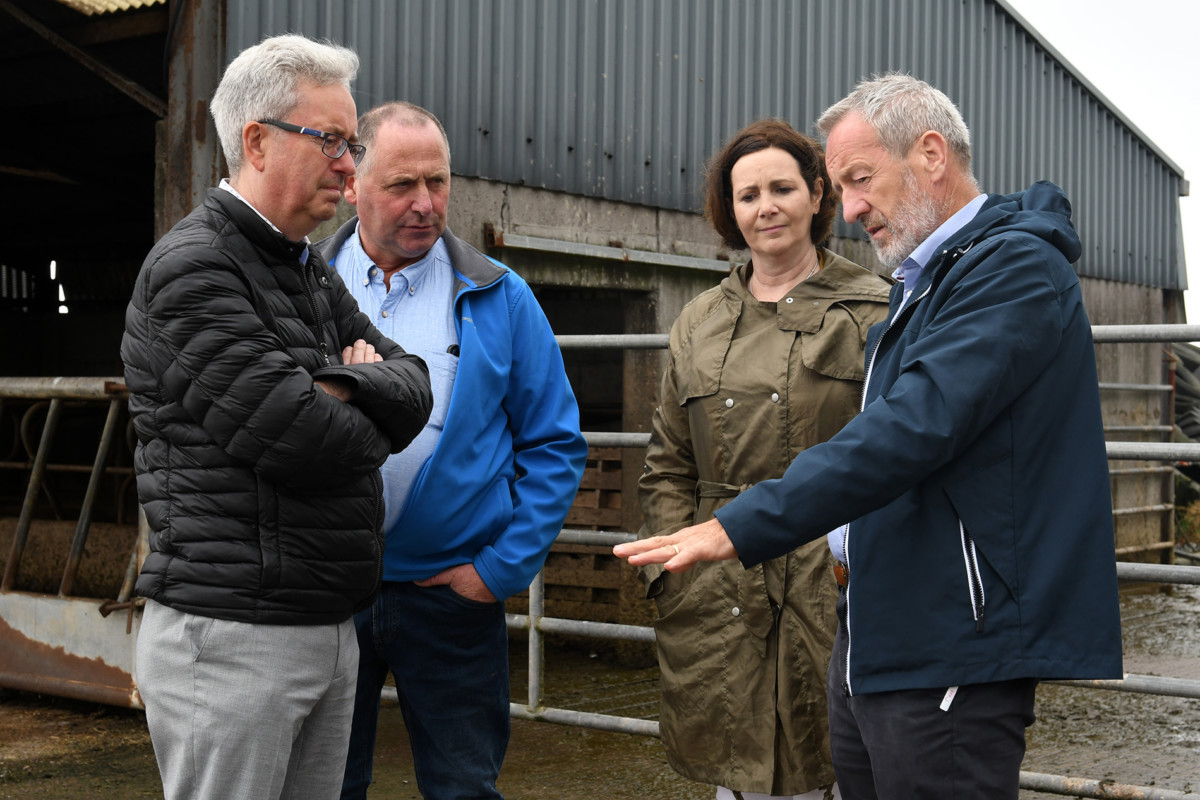 Seán Kelly MEP visited Dingle on August 22nd where he was meeting colleagues from ESB Networks, talking about their involvement in the Corca Dhuibhne/Dingle Peninsula 2030 initiative. Dingle Hub Manager Deirdre de Bhailís also gave the Member of the European Parliament an overview of this initiative and all else that Dingle Hub is involved in, both in Corca Dhuibhne and on a national level.

Mr Kelly heard how trial projects within Corca Dhuibhne 2030 have gone on to inform policy and best practice. ESB Networks ran a number of trials under the name ‘Dingle Project’ to understand the impact of clean energy enabling technologies like solar PV panels, Heat Pumps, Batteries (to store excess solar energy) and EV charging on the electricity network,

In January 2021, ESB Networks launched their one-year electric vehicle (EV) trial. The objective of the community trial was to understand the impact of electric vehicle charging on the electricity network. 17 cars were provided to members of the public who drove more than 350,000km over the year.

[/caption]The trial found that EVs really are suitable for most journeys undertaken by people living in rural communities like Corca Dhuibhne. On returning their vehicles, around half of the participants reported that they had or were going to purchase an EV or else explore their options to replace their petrol or diesel car.

One of the ambassadors for this Dingle Project was Lispole farmer Dinny Galvin, who had his family farmhouse upgraded with renewable and clean energy technologies e.g Solar PV System, Air Source Heat Pumps and a Smart EV charger for his electric vehicle. Dinny welcomed the Ireland South MEP and the ESB Networks team onto his farm to see this technology. He also showed them a heat exchange system that he invested in for his dairy parlour which helps significantly with energy efficiency.

“I’ve been blown away by the amount of positive activity at Dingle Hub! Particularly the engagement with the local community, the positive spin-offs for people in these communities and above all the contributions towards emissions reduction and our national climate targets.”

“ESB Networks was delighted to welcome Seán Kelly MEP to Dingle to share insights and learnings from its Dingle Project. In collaboration with the local community, ESB Networks worked to understand the impact of clean energy enabling technologies such as electric vehicles, EV chargers, solar PV, batteries and heat pumps on the local electricity network, to help inform the design and operation of the network to support a low carbon society.”

The @DingleHub provides a template of how Ireland can transition to a sustainable economy and society.

It was a pleasure to meet those involved to see the work on the ground and the engagement with the local community.