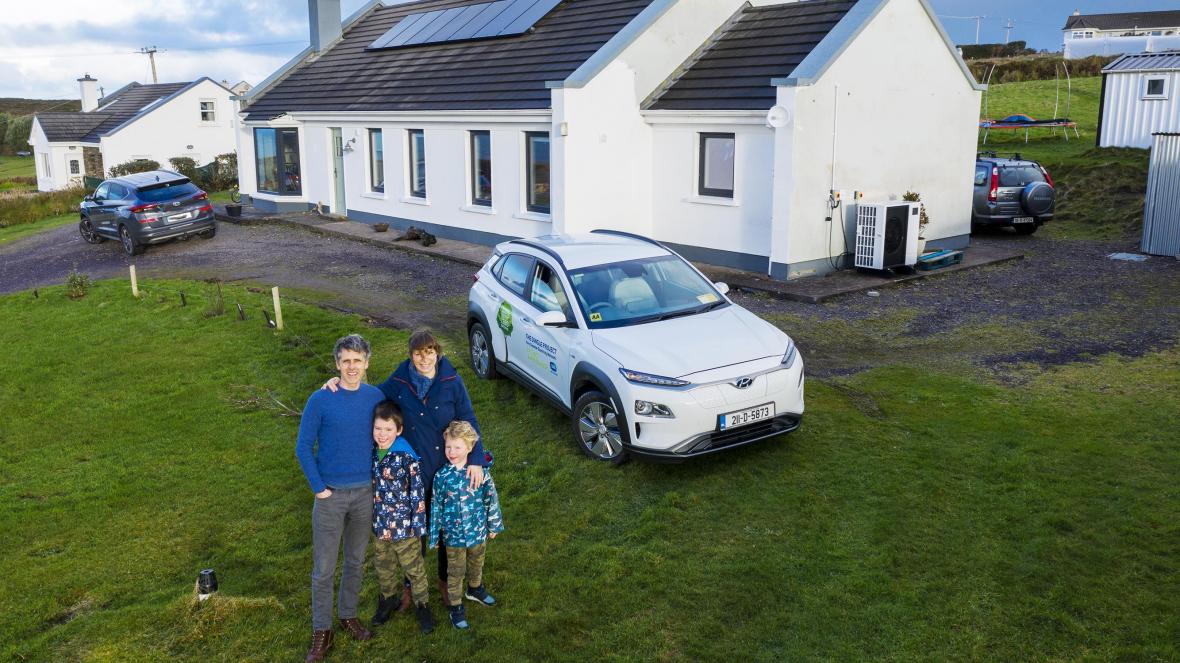 In the past year or so Rory McKeown and his wife, Bláithín Ní Ainín, have had solar panels installed on their roof, followed by a deep retrofit to their home that included insulation for the attic and walls. They’ve replaced all the windows and doors in their house and installed new radiators, removing an old oil burner and replacing it with an air-to-water heat pump. The family are one of a lucky few — chosen from a large number of applicants — to have their home retrofitted. Not only that, they have also been chosen to trial an electric vehicle for a year.

It’s all part of Corca Dhuibhne/ Dingle Peninsula 2030, a community project involving local residents, farmers and companies that aims to turn the peninsula into a more environmentally friendly, low-carbon area.

“We live on the edge of Europe on a mountain overlooking the Blasket Islands so get absolutely hammered by storms from September to May and despite having double glazing, our house was always draughty,” says Rory, who with Bláithín is parent to Art, 6, and Lughan, 4, and works as a consultant for the World Health Organisation.

“The BER [Building Energy Rating] of our Nineties bungalow was just D1 and although we had planned to improve it, when the opportunity arose to apply to be ambassadors for this project, we were really keen — and very excited when we were chosen. Our BER rating has now gone up to an A2.”

“The house is warmer, there is always hot water available and there are never any issues about turning on the immersion or the heat. We have become much more aware of energy usage and regularly check the weather to decide when to put on the washing machine and dishwasher to maximise the energy produced by the solar panels.”

Even though it is early days, Rory says the family have already experienced a reduction in their electricity bills. Dingle Peninsula 2030 organisers say they could save the peninsula up to €8 million by reducing energy demands and using local energy resources.

The overall aim of the three-year project, which will be completed this year, is to create a sustainable future for the region. Led by ESB Networks along with Dingle Creativity and Innovation Hub, North East West Kerry Development (NEWKD) and MaREI, the Science Foundation Ireland Centre for Energy, Climate and Marine, the programme could become a model for other communities around the country.

Claire McElligott, the Dingle project engagement manager for ESB Networks, says there has been good involvement with local residents.

“The community is working with us so we can not only understand the impact they will have on the electrical network, but also how diffusion of active energy citizen behaviours can be enabled across the wider community,” she says.

ensors have also been placed in Dingle’s waters — including at Dingle and Ventry harbours, and Tralee Bay — to measure water quality. The information gathered will be helpful for businesses and farmers, and will help to predict weather events.

Clare Watson of MaREI says it is hoped that Dingle Peninsula 2030 will prepare the area to reach climate targets.

“Part of our aim is that it should be beneficial for the people who live and work in the area and also for the economy,” she says. “This will be achieved by retrofitting houses to make them more comfortable and geared up for weather events, encouraging the use of electric vehicles, listening to people’s concerns and also preparing for the future as climate change is here, and we can’t shy away from it.”

“It isn’t enough for messages to come from on high. People don’t know how making [environmentally friendly] changes will impact them and many feel they will have to give up and change a lot in their lives. So the way to counteract this is to work with locals, listen to them and involve them on their own terms.”

Deirdre de Bhailís runs the Dingle Hub, which she says is at the heart of the mission to build a creative, liveable and sustainable community and is resulting in an actively engaged group that is working together

“The Corca Dhuibhne 2030 team have been running a variety of different workshops and events spanning energy and socio-economic planning, agriculture, future visioning and skills building,” she says. “These help to strengthen community networks and provide valuable forums for collaboration on societal and enterprise projects.”

Seamus O’Hara, a community manager with NEWKD and a mentor for the Sustainable Energy Authority of Ireland, agrees and says the area will reap the benefits as much of the housing stock is old and poorly insulated.

“The age of many of the houses in west Kerry means people have to spend more money on heating and because insulation isn’t good, much of the heat disappears, so they would really benefit from retrofitting,” he says.

“The region is also badly served by public transport, so the ripple effect of that is that there is a higher ownership of cars than the national average and people spend more on transport than they do in other parts of the country. ”

To counteract this, Local Link Kerry has introduced new routes with electric buses on the peninsula. There will be more walking and cycle routes too, which together with the shift to electric cars will mean less noise and air pollution, says Watson.

Covid-19 has hit the peninsula hard, with a shortening of the tourist season and a drop in overseas travellers. Watson says it is hoped the green economy will provide jobs and that local communities can create their own energy and reap the benefits from the profits, while protecting the area’s biodiversity.

“Sustainable tourism offers a high-value product rather than mass tourism, and the shift to online working will hopefully mean that more young people will be able to stay and work from home, which will result in less emigration and commuting,” she says. “And hopefully the benefits of being less rushed, less stressed, and more focused on what matters, will also come from the sustainable low carbon transition.”

There are 35 community trial participants and 171 project devices have been installed. Louise O’Brien of Ballydavid, a village on the peninsula, believes things can only get better.

“The Dingle Peninsula 2030 project not only facilitates a creative space for the potential future of remote work for people like me, with innovation hubs and high-speed gigabit broadband, it also includes a number of projects for future generations,” says O’Brien, who works in account development.

O’Brien praises plans to turn the former Dingle Union Workhouse — later a hospital where her mother nursed — into a multi-use community building with education facilities, tourism experiences and a small theatre, as well as providing a taste of what a future low-carbon Dingle might be like.

“Dingle Peninsula 2030 allows people to focus on sustainability and agricultural developments and, long-term, it breaks the barriers placed on the generations of country folk who have had to move to cities in order to succeed. It has ignited the flame for future generations to pursue careers from the comfort of this cosy peninsula,” she says.

Canadian-born Artie Clifford, a local resident and the chairman of Blas na hEireann, the Irish food awards, agrees and says the project is essential to protect the area for future generations.

“I am fully supportive of the initiative, which is also welcomed by the greater population of the peninsula. People are already active in maintaining the environment and the natural beauty of the area,” he says. “I am of a generation that wasn’t as tuned in to the effect we had on climate change, but I believe the practices we adopt now and, in the future, should be the norm — this should be our legacy.”

Ploutos announces the official launch of its Sustainable Innovation Pilots!